Oxford Food Bank has found it saves more than £1m of surplus food a year from landfill after Unipart volunteers helped measure produce coming through the charity’s warehouse. 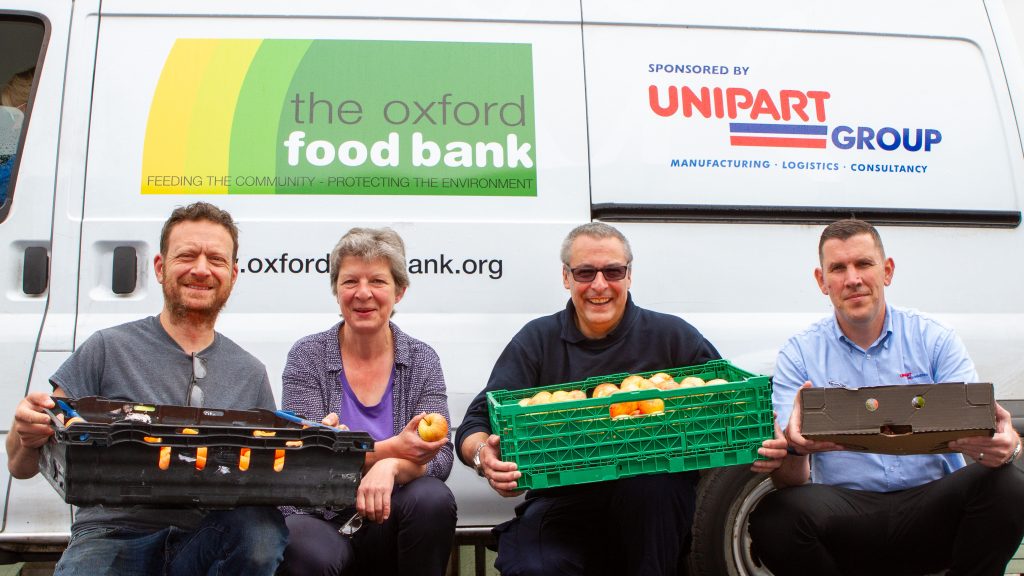 The initiative is part of Unipart Group Cowley choosing Oxford Food Bank as its nominated charity.

Volunteers from Unipart Logistics in Cowley have been working at the food bank’s Botley site to weigh how much surplus food from local wholesalers and supermarkets is being redistributed free of charge to over 100 charities in Oxfordshire.

Oxford Food Bank redistributes fresh food with a short sell by date such as fruit, vegetables, dairy and baked goods, which makes it different from most other food banks which handle longer life goods. Their volunteers deliver this fresh produce to other charities, most of whom are cooking meals for their own clients, for example, homeless shelters, mental health charities, children’s groups, dementia clubs, hospices and schools.

Last year Oxford Food Bank was recognised with a Queen’s Award for Voluntary Service, the MBE for volunteers.

Accurate information about the amount of food redistributed will help Oxford Food Bank engage with the community and ultimately raise more much-needed funds.

In addition to helping Oxford Food Bank streamline its warehouse operations, Unipart is encouraging employees at its Cowley site to raise money for the charity.

Hayley Dry, Unipart Group Cowley charity committee chair, said: “We’re delighted to have Oxford Food Bank as our nominated charity. Improving efficiency and reducing waste are at the core of Unipart’s principles, expressed through our philosophy The Unipart Way, making our support of Oxford Food Bank a natural fit.

“Our Unipart Logistics colleagues in Cowley have already volunteered their expertise at Oxford Food Bank and shown we can add real value to their objective to redistribute surplus food to Oxford’s most vulnerable people.

“There is terrific enthusiasm amongst Unipart employees to raise money for charity and we will be encouraging them to fundraise for Oxford Food Bank.”

Cathy Howard, Manager of the Oxford Food Bank, said: “We’re immensely grateful to Unipart for all their help, but particularly so for the data on our collections. This is hard evidence for the incredible achievements of our volunteers, who work tirelessly seven days a week to keep quality, unsold fresh food out of landfill”.

“The energy and enthusiasm put into this project by Unipart’s logistics team were very much appreciated”, added Oxford Food Bank Operations Coordinator Marcelo Pollack. “We’re such a busy charity, day in day out, that we would never have found the time to do this ourselves!”