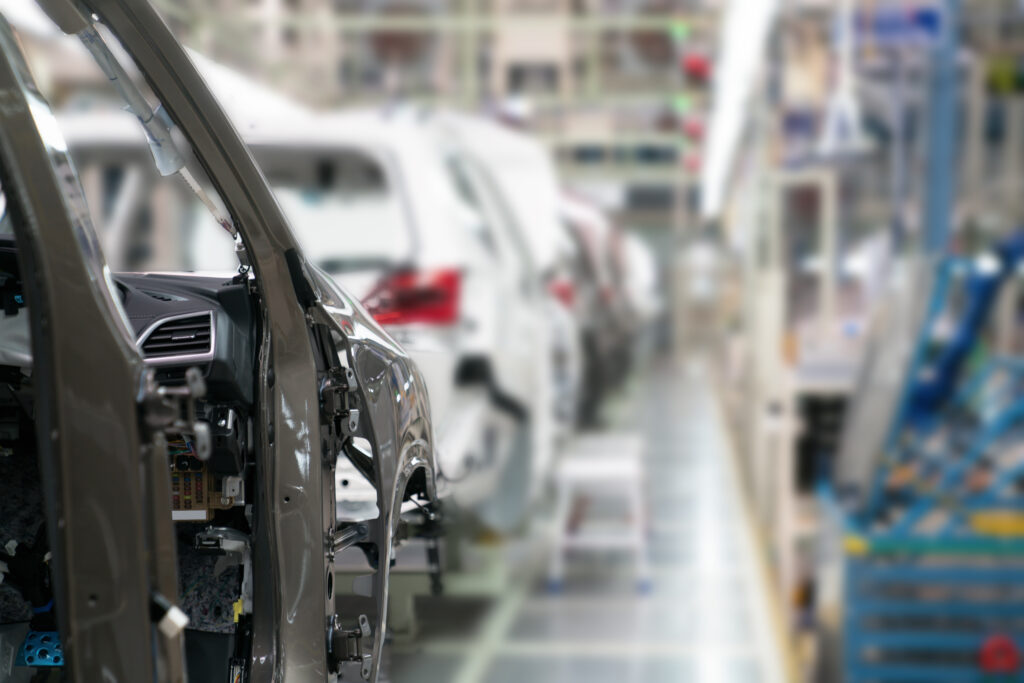 This major automotive manufacturer produces vehicles with a large number of customer facing options and extras; a high complexity product with a particularly high degree of variation. Facing issues with quality, cost and productivity (needing to effectively  balance cycle times to customer demand), the manufacturer sought to put an ambitious programme into action.

This would deliver what they called a ‘Stable TAKT’ program across its entire UK assembly hall ahead of the launch of a new car model. The programme’s KPIs had been set to challenge the business in preparation for a new vehicle launch, but a number of significant gaps had been identified in the manufacturer’s ability and skill set to facilitate and deliver the program. The assembly unit was not realising the expected benefits or delivering the expected results.

The production line had a low level of efficiency as in order to deliver a fully flexible production plan with the ability to build any vehicle specification at any time and in any quantity, more team members were deployed on the  line. However, these additional people would then be left  under-utilised or sometimes idle, when vehicles of a lower  specification, and shorter cycle time, were being built.

The lack of a balanced workload had also increased the risk of poor quality – additional team members had  been deployed to check and inspect vehicles at planned  intervals. This was detrimental to the efficiency of the  production line.

In order to maintain a Stable TAKT time across the production line, cycle time variation needed to be balanced against customer demand (or TAKT time). This would require a higher degree of flexibility being built into a redesigned process, that would raise efficiency to the desired level. By building quality into the process, check and inspection points could be reduced which would further increase efficiency.

To help the organisation bridge the gaps in capability and skill, the manufacturer identified the need to partner with an experienced organisation that could bring expertise in TAKT/cycle times, understand and integrate processes, drive out waste and identify and trial new ideas without endangering quality. The potential partner needed to be able to engage with management and production teams in a practical  way, as well as transfer capability so that improvements could be sustained and built on for the future.

Many of these requirements are key features of  Unipart’s world-class body of knowledge – ‘The Unipart  Way’. Together with Unipart’s manufacturing expertise and coaches skilled in capability transfer and delivering sustainable change, Unipart were recognised as best fit to deliver the projects benefits:

Unipart Consultancy worked alongside the customer to  develop their ‘Stable TAKT’ model and integrate this  into their production system. This approach involved an analysis of the current process, developing idea generation from front line teams, testing ideas with  offline trials and simulations, training of team members  and team leaders, integrating and embedding process change and sharing new best practice across the assembly line.

Of key importance were the offline test areas that were  created for testing and simulation away from the live  assembly line. Here, cross-functional teams could work  together with a Unipart coach to generate and test new  ideas and produce practical solutions.

By splitting the assembly hall into ‘modules’, with a Unipart coach assigned to each, it became easier to manage and communicate out process changes and identify when and where these changes might  impact upon downstream processes in other  production ‘modules’.

The cross-functional team in each ‘module’ were  monitored for their performance towards the project  targets, and a spirit of competition was created that  helped drive teams to create further improvements.

Following the conclusion of the initial project, the Unipart coaches worked with the site teams to ensure  that learning and knowledge sharing continued and that the improvements were sustained.

The project was successful to the degree that the global manufacturer saw fit to roll out the changes, developed as outputs of the Stable TAKT project within this production facility as best practice in its global production system.

All areas were able to realise significant benefits: